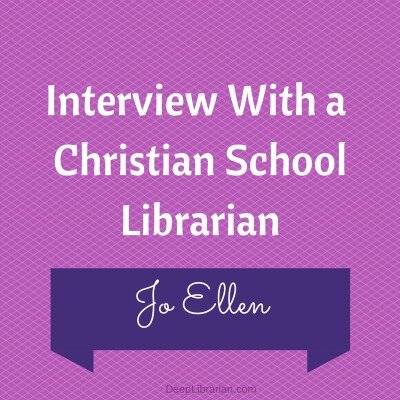 I recently spoke with Jo Ellen Misakian, Program Director for the Teacher Librarian Services Credential at Fresno Pacific University (FPU).  I’m so excited to share our conversation with you today.

You see, we conducted our interview on Skype and I recorded it with the intention of transcribing it for this blog.  But I somehow lost the audio file.  Despite the fact that I practiced recording several times beforehand (in order to avoid this exact catastrophe!), the file has disappeared.  I  looked in every folder and every location on my computer.  I consulted forums online and even put out a desperate plea for help on Facebook.  But I never found the file.  After a few hours of trying to recover the file (and a few tears), I gave up.

I decided the next best thing would be to paraphrase our interview.  So please keep in mind that the responses are paraphrases (from my memory) of what Jo Ellen said.  I’m writing this about 4 hours after our conversation ended.  It pains me so much that I don’t have her verbatim responses, because she was so wonderful!  (Seriously, I’ve buried my head in my hands and banged the table in frustration several times just writing this intro!).

The wonderful thing about Jo Ellen is that she has had experience at every level of education.  She first started working in libraries as a paraprofessional without a library degree.  She eventually earned her MLIS from San Jose State University, and after some time as a District Librarian in the Fresno/Clovis area, she became the director of the Teacher Librarian Services Credential at Fresno Pacific University.

Another awesome fact about Jo Ellen is that she is responsible for The Outsiders book becoming a movie!  In the early ’80s while she was working as a school librarian, she wrote to movie director Francis Ford Coppola and told him her students and teachers wanted him to make a movie out of the book.  Her students signed a petition and Coppola began shooting the movie a few years later.  In fact, there is a dedication to Jo Ellen and her students at the end of the movie.   What a great example of how librarians are world-changers!  You can read more about this amazing story in this 1983 article from the New York Times.

Q:  I started off by asking what advice she would give to someone who is in charge of a school library, but has little or no formal library training.

Answer:  Jo Ellen encouraged people in this situation to think about enrolling in a paraprofessional certification program.  She mentioned that ALA offers a Library Support Staff Certification and many community colleges have a similar program.

She also said that she encourages library workers to further their education as much as possible and she’s always supportive of anyone who wants to pursue a library credential or MLIS.

We talked briefly about the fact that for some, the support staff certification may be enough to meet their needs.   Many states have school districts that rarely hire certified teacher librarians at the elementary or middle school level.  So if you’re working at an elementary school level and intend to stay at that grade-level, you may want to focus on getting that support staff certification and then work on really honing your skills to the best of your ability.

Q.  Next, I asked about what distinguishes her Credential Program at FPU from other secular credential programs.

Answer:  She responded that she thought the value of a Christian university credential program was really in its service aspect.  She liked the fact that professors and students can freely pray together and talk about their personal faith and how it integrates into their work.

Q.  I asked her to speak to the tension that teacher librarian in Christian schools often feel when they try to balance professional ethics with the values of their school.  I gave her an example of how it was difficult for me to reconcile my desire to keep students’ circulation records private when the school administration wanted me to make them freely available to parents and teachers.

Answer:  Jo Ellen responded by acknowledging that this is a difficult area.  Many teacher librarians feel this way in regards to book challenges by parents.  She stressed the importance of having a collection development policy in place.  The policy protects the teacher librarian, the parents, AND the book in question.  She also said that no teacher librarian should ever feel like they should have to lose their job for a book, and that we simply need to do the best we can do in our specific situation.

She also had some wise advice to teacher librarians who find themselves in the middle of a book challenge.  She said it’s important to not get defensive.  We need to approach it from a place of cooperation, and acknowledge parents’ desire to control what their child reads.  However, we should gently remind parents that they cannot control what other children read.  When we respond with a spirit of gentleness and cooperation, the outcome is likely to be more positive.

Q.  Next, I asked Jo Ellen how Christian librarians working in secular schools can be a light for Christ while still respecting other people’s beliefs and upholding the law.

Answer:  She responded that she tries to live a life that is a good example of Christian beliefs.  She also acknowledged that sometimes that’s not enough, and told a story of how she one re-connected with a former student who had gone on to work in youth ministry.  He discovered she was working at a Christian university and said he hadn’t realized she was a Christian.  She said that conversation made her realize that sometimes we need to be more vocal about our faith, when appropriate and without offending others.  She suggested that a simple way of doing that could be to let others know you’re praying for the when they go through something difficult.  It’s not pushy and it’s offensive, but it does plant the seed that you are a person of faith.

Q:  Finally, I asked Jo Ellen if there was anything else she’d like to say to new librarians in particular.

Answer:  She said she wants them to know that being a teacher librarian is a fabulous job. We get to be a student’s teacher not just for one year, but for however long they attend our school.  We get to watch them grow and we get to provide a safe place for students who may have trouble fitting in otherwise.  She told a story about a student who was spending a lot of time in her library because he didn’t fit in with other kids.  Some teachers wanted her to encourage him to go play outside and get out of the library.  Rather than do that, Jo Ellen allowed him to help create her library newsletter and to do some video recording for her.  Well, we all know that students love to record themselves, so this students quickly became very well-known for his video skills and his confidence improved. That student went on to career in television journalism in New York!  It’s yet another example of how librarians and libraries can change people’s lives.

I really appreciated that she took the time to ask me some questions about myself and about my experience, and she had some very encouraging words to say about this blog.  If you ever have the opportunity to hear her speak or learn from her, I highly encourage you to do so!

Again, these paraphrased responses do not do justice to the interview Jo Ellen was so gracious to grant me.  My deepest apologies to her and to my readers for losing the audio file.  If you’d like to be interviewed for this series, click here to let me know about your interest!

One thought on “Interview (Sort of) With a Christian School Librarian: Jo Ellen Misakian”